Ok, so I thought things were going really well. From all the work I’ve been doing on this website, all the books I’ve been reading, videos I’ve been watching, articles I’ve been searching through, I’ve discovered some new strategies and ways of interacting with my mom that have really been making a difference. It’s been nice. I’ve been feeling more like “friends” than mother and daughter butting heads. I’ve been more patient, she has seemed less critical and we’ve been having a nice time together. Was it unreasonable to think it could stay this way???

I’m not even sure exactly what happened last night, but I guess old buttons got pressed, I was quickly transported back to adolescence and I just lost it. It wasn’t a full blown screaming fight, but it at least warranted a brisk hang up on my mother’s part (although, I might have done the same if she hadn’t done it first). When I was younger I used to have this awful feeling whenever we had a b 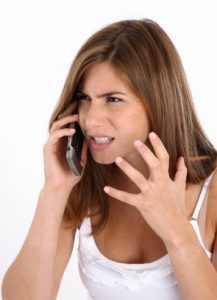 ig blow up fight that this was it….we would never speak again and she would no longer be my mother. That feeling translated to other relationships as well…for years I thought that whenever my best friend and I fought it was the end of the relationship. As I became an adult and grew emotionally, I came to see that wasn’t the case. Basic feelings of love and caring don’t go away just because you fight, and things can be worked out. So, I know that my mom and I will speak again and we’ll work out whatever issues reared their ugly heads last night. But how do I handle all my feelings of guilt, remorse, annoyance (more than anger at this point) and how to keep this kind of thing from happening again…if that is even realistic?

When we hung up the phone last night, I was upset and I struggled with what to do next. Call her right back? Call her later? Let things sit overnight? I decided to give it the distance of the evening to let us both cool off.

I guess I can’t beat myself up over this too much. After all, I think this whole thing is really just a process. She and I have had so many years of relating in a certain way. It can’t be changed magically overnight. I feel like we’ve really been making great progress, though, so I guess I should just accept these slip ups. I need to accept that my mom will still say and do some things that will bring me back to my childhood and upset me. I need to accept that I will sometimes say things back and we’ll argue. Both of us will be unreasonable or critical of each other at times. It’s a complicated relationship with lots of history, long ago hurts, many ups and downs. But those downs don’t need to take away from the good stuff. And there is always good stuff.

I read a book about making peace with your mother before it’s too late which was a featured book on this website and which I wrote a blog about. The book includes all kinds of stories of mothers and daughters…one where the mother was a great mother all through the daughter’s childhood but fell apart after the father died, one where the mother was always very critical and distant and even one where the mother was terribly abusive and mean. One of the many things to come out of the book is the fact that in every scenario (and some of the scenarios can really make you appreciate your own situation a lot more) there is always something good to find in the relationship.

And there is a lot of good in my relationship with my mom. I remind myself of that every day. No matter what differences we have between us or fights we get into, I know she loves me. I know she has my best interests at heart and is proud of the person I’ve become. I know it is through her teachings that I have learned to have compassion and empathy toward others. And I know that from her I learned that as long as you wear a smile, it doesn’t matter what else you are wearing!…

You know, I think I’m going to give her a call right now…and tell her I love her.

Note: I was just going to end this blog here, but Laurie has been bugging me for days to “finish it” and tell what happened next. Ok, ok… I did call my mother the next day after our fight and things went very well. We both had had time to calm down and give a little thought to what had happened. She admitted she hadn’t been in the best shape the day before and realized that she must have hit some of my buttons. I admitted she had and I had felt criticized and resorted back to adolescence reactions. We were able to talk it all out, say we loved each other and make plans to get together to go to a movie over the weekend. I found that writing the blog really helped me sort through my feelings and put things into perspective (a hint to others who might find it helpful to write things out as well). So, now this is the end of the blog!  🙂