You Don’t Really Know Me

You Don’t Really Know Me
By Terri Apter

Few other family pairings are quite as combustible as a teenage daughter and her mother. In fact, they argue, 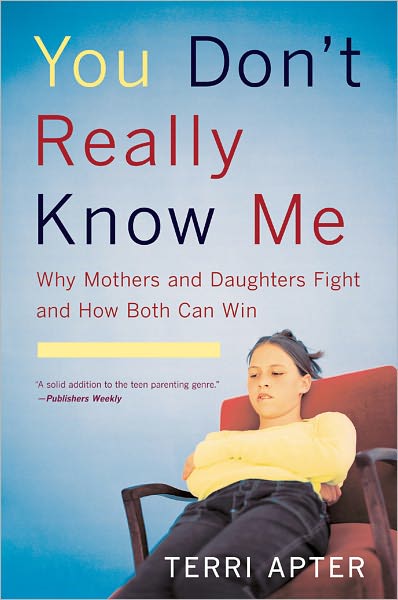 on average, every two-and-a-half days.  These quarrels are actually attempts to negotiate changes in a relationship that is valued by both mothers and daughters, as psychologist, Terri Apter, discusses in her book, You Don’t Really Know Me: Why Mothers and Daughters Fight, and How Both Can Win.

In fact, even fights that seem to be about nothing are a teenager’s attempt to navigate perilous emotional terrain.  Handled well, these battles can help both mother and daughter emerge with a renewed closeness, says Apter.  It’s not the frequency or intensity of the battles, but, instead, what happens during them that can strengthen or damage the relationship.

“Fighting well with a mother is an important skill,” Apter states.  Mothers who ridicule, shame, silence or issue an ultimatum may undermine their ties to daughters who are seeking to recast their relationship, not destroy it.

A teenage girl, she writes, wants her mother to see her as she is, or as she aspires to be, and not as the little girl she once was — or whom her mother hoped she would become.

A daughter often feels her mother doesn’t know or understand her, and by fighting hopes to force her mother into a new awareness of who she really is, how she has changed, and what she is now capable of doing and understanding.  But mothers often misinterpret their daughter’s outburstscontinue reading

There is actually a silver lining to the battles during a daughter's adolescence. What?! Read excerpt from The Complete Idiot's Guide to Mothers and Daughters by Rosanne Rosen. Read the articleread more

By Tara Deliberto, PhDc, ParentingPink.com You’re a mother of a daughter you adore.  You would do absolutely anything for her.  While she is off socializing with her friends, occupying herself with hobbies, and toying with ideas of what she wants to become, you have the pleasure of sitting back aread more

You Say Your Daughter Isn't Like You? Learning to Appreciate the Differences

By Janet from Michigan When I first found out I was having a baby girl, I pictured her as a miniature version of myself:  dark hair and lots of it; hazel eyes.  She arrived with barely any hair and beautiful blue eyes. I envisioned a sweet little girl who wanted to please her parents.  I gread more

Whether trying to discipline your daughter or just having a heated debate, once a parent begins to yell, they've lost credibility. Here are 3 things you can do to keep yourself from yelling: Be responsive, not reactive. Let your teen own the problem. Keep your frustrations in chread more

Are You Trying to Look Like Your Teenage Daughter?

Turns out that, according to a recent study by Temple University researchers, teens have more of an impact on what their mothers wear and buy than their mothers have on them. The study, published in the Journal of Consumer Behavior, included 343 mother-daughter pairs who completed questionnaires read more

Side by Side: The Revolutionary Mother-Daughter Program for Conflict-Free Communication

The book, Side by Side, examines how to openly communicate with one another For many, motherhood is one of life's greatest joys, but getting along with your children, particularly daughters, isn't always a piece of cake. In “Side by Side: The Revolutionary Mother-Daughter Program for Conflict-Free Cread more

I Love My Teenage Daughter, But I Can't Stand Her Right Now

By Evelyn Resh, Oprah.com Tears, fights and backtalk—raising a teenage daughter is not always a bed of roses.  But what's normal? Evelyn Resh wants you to know that loving her and liking her don't always have to go together. I have yet to meet a woman parenting a teen girl who hasn't lookread more

You Don't Really Know Me

You Don't Really Know Me By Terri Apter Few other family pairings are quite as combustible as a teenage daughter and her mother. In fact, they argue, on average, every two-and-a-half days.  These quarrels are actually attempts to negotiate changes in a relationship that is valued by both motherread more

Parenting Adolescents and the Problem of Blame

by Carl E. Pickhardt, Ph.D., Psychology Today Exchanging blame between parent and teenager risks doing harm Blame is the act of charging some personal injury to other people or to oneself.  It is meant to fix responsibility for wrong doing or what went wrong.  Blame is about finding and fixingread more
1 2 Next >>