Wow, I’m not even sure where to start in writing about this book. There’s so much meat to it. I found the subtext of the title (“Making Peace with Mom – Before It’s Too Late”) to be particularly poignant for me since my mom just turned 88, and I used to worry about not making peace with her when I was younger and we were really struggling with our relationship.

When I sat down to read this book I thought I would just read it like any other book…like a novel even…but I quickly came to the realization that that wouldn’t work. There was just too much “stuff” in it to read leisurely. I ended up reading it like it was a textbook, keeping a small note-pad by my side at all times. I took notes on things I wanted to remember or that were meaningful to me, as well as other book references I wanted to look for at the library. Admittedly, I might not have read the book this way if I wasn’t planning on writing about it, but there was definitely a wealth of information to take in (even if some of it became repetitive at times).

From the very start of the book, I felt like the author, Iris Krasnow, was writing my story! I quickly made a note in my pad, “It’s like I wrote this book!”  But, actually, she was writing many people’s stories. That’s why I think it’s such an important book.

This book also made me think back to my own childhood. When I was younger I often felt I was the only one with a difficult relationship with my mother. My friends all seemed to have good relationships with theirs…at least from the outside. I didn’t even know how my sisters felt because they were so much older and out of the house before I was out of elementary school. Since I spent so much time as the “only child” in the house, it seemed like I was the focus of all the mother/daughter strife. I spent a lot of time wondering what was wrong with me and my family. Little did I know then, just how universal this mother/daughter conflict is. I thought my family was so dysfunctional until I grew up and found out that we actually weren’t so bad after all. I really wish I had known that then and could have appreciated what I had more. At least I realize it now and that makes a difference to me. It’s definitely not too late.

And that’s a key message here…it’s never too late to make peace with your mom while she’s still here. The author talks about her own relationship with her mother, which was troubled, but she found a new peace with her in later years as her mom was dying.

Ms. Krasnow, who is also a journalist, interviewed many women about their relationships with their mothers for this book. Their stories are all completely different and run the gamut from wonderful mothers to really awful and abusive mothers. I think it’s helpful to hear other people’s experiences so you can put your own into perspective. The author and her interviewees say that if you can’t forgive your mother, you should at least try to forget the past and move forward. Of course that’s very difficult to do and it takes a certain amount of maturity as well as the ability to try to understand that your mother is the product of her own mother. This process is talked about quite a bit. 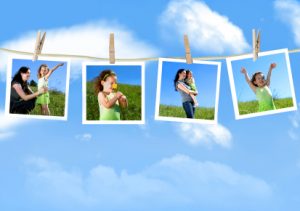 We form our view of our mother at such a young age and sometimes it’s hard to let go of the “fantasy” mom we always wanted. The fact that women are now living longer means that we have more time to try to make things right with our mothers in adulthood. It’s a chance to look beyond the childhood hurts, see our mothers as real human beings (with their own hurts, disappointments, challenges, etc.), lower our expectations and make peace with our moms. As psychologist, Florence Wiedemann is quoted as saying, “No mother is the Great Goddess who is always good. Each of us is just an ordinary woman who tries to be as good as she can be. And at some point, we all fail. Know that your mother did the best that she could and get on with things”

Another great quote in the book was from one of the interviewees. She said, “You know, if the ending of a novel really blows you away, that’s how you remember the book. I am working on writing those last chapters with my mom to make them great.” This book shows you how several women have been able to do that (and the resulting guilt and grief for some women who weren’t), and it may just open your eyes to see how you can do it yourself. As one woman who did not make peace with her mother before she died notes, “Today I tell my women friends that no matter what she did to you…you don’t serve yourself well by not having closure with your mother. You need to make peace before she dies.”

I’m working on writing those final chapters with my own mom, and this extra time I have with her is something I will always cherish.

2 responses on “Book Discussion: “I Am My Mother’s Daughter: Making Peace with Mom Before It’s Too Late” by Iris Krasnow”