We read so much about family estrangement, about mothers and fathers and their grown children who simply enter a cold war of ceased communication: Eminem and his mother, Jennifer Aniston, Kim Basinger, Jenna Malone, and their mothers, Gerard Depardieu and his son, the Reagans, whose estrangement from their children even merited prominence in the TV special about the former First Family. The list goes on and on. 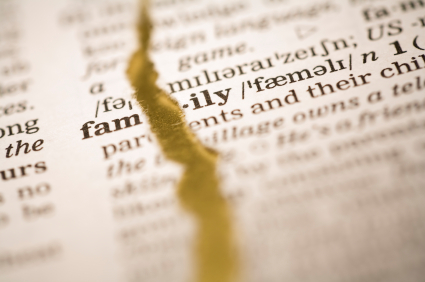 While glamorous stars get into the spotlight when there’s a rift in their family, the problem afflicts ordinary folk with a surprising frequency as well. There’s a shocking lack of statistics available on the subject of family estrangement, but as a psychotherapist in practice for many years, it’s my impression that cut-offs have become a lot more common than they used to be. I hear this from other therapists, too. I also teach family counseling to pastors of all faiths and they tell me that family rifts are an increasingly frequent problem brought to the clergy’s attention.

In my own practice, I’m reminded of Gail*, a young mother and freelance commercial artist in New York. Gail has two of the most wonderful daughters in the world, but her mother hasn’t spoken to her since she married Carlos, her college sweetheart, who’s unacceptable to her mother because he’s Latino. Janet is a grandmother of four who’s got a great relationship with her two sons, but whose daughter Shelly hasn’t spoken to her since she divorced Shelly’s father.

Why are so many family members not speaking to each other these days? If I had to isolate the common thread in these situations, I’d have to say it’s because of intolerance. Certainly that’s evident in instances where family members bury each other for lifestyle choices such as homosexuality and choices to marry outside one’s religion, race, nationality or ethnicity. But intolerance is also the root cause of family fights that lead to rifts, and by that I mean a prejudice toward differing points of views, small-mindedness when it comes to giving up a grudge, or pettiness and nastiness about forgiveness. It’s very similar to the intolerance, bigotry, and prejudice that create rifts between nations and among diverse groups in our cities, states, and nation.