Below is an article we posted previously about Jennifer Aniston and her mother’s decade-long estrangement, which came to 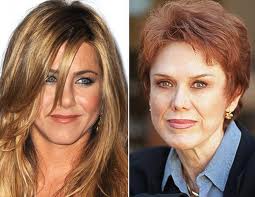 an end a couple of years ago.  In 2009 Jennifer said this about her relationship with her mother to gossip columnist, Cindy Adams, “It’s good.  It’s Ok.  Things are now fine between us.  All of that is over and we’re in touch with one another.  We speak and it’s all over.”

Now, Jennifer is offering support to her mother after she suffered a stroke a few days ago.  Jennifer was spotted at the LA Medical Center where her mother, 75, is reported to be in serious condition and unable to speak. Jennifer immediately rushed to her mother’s side.  A spokesman for Jennifer has refused to comment on this personal “family matter.”

Jennifer and her mother famously became estranged in the 90’s when Nancy first spoke about her daughter to a tabloid TV show and then wrote a tell-all book in 1999 sharing personal pre-fame stories about Jennifer.  Jennifer then made the very difficult and painful decision not to invite her mother to her wedding to Brad Pitt in 2000.

But Aniston’s problems with her mother started many years before.  Nancy, a former model, reportedly often picked on a young Jennifer about her looks, her weight, the spacing of her eyes.  Jennifer has said that these criticisms filled her with “fear, doubt and insecurities.”

In 2001, Jennifer said this about their estrangement to the London Telegraph, “I really think my mother was doing the best she could, but she didn’t know where she ended and I began.  This separation had to happen for both of us to find out.”

But by 2009 Jennifer and her mom had reconciled and now Jennifer is able to be there for her during this health crisis.  We wish them both the very best.

We often put celebrities on a pedestal and seem to think that they have “charmed” lives where everything is easy and glamorous, but they really have the same problems we do (maybe even some additional ones caused by their celebrity). Famous daughters are certainly not immune to a difficult mother-daughter relationship. Jennifer Aniston’s is one example of a difficult relationship that was able to be healed.

Jennifer and her mother originally became estranged back in 1996 when her mother, Nancy, made “unflattering comments” about her daughter on a tabloid TV show. “I didn’t talk to my mother for two years, but then I was getting married and thought, ‘She ought to know the man I’m going to marry. So get over it. If she can’t apologize, I’ll do it.’ So we got together once, and it went great, except she neglected to tell me she was doing this book.”

” was the 1999 book, From Mother and Daughter to Friends that her mother wrote about Jennifer’s childhood. This time they didn’t speak for at least 7 years. In fact, Nancy then wasn’t invited to Jennifer’s wedding to Brad Pitt.

But Jennifer decided to reach out to her mother again during her 2005 divorce from Pitt, which was strikingly similar to the divorce her mother had gone through many years earlier when Jennifer was just nine years old. Aniston’s soap opera star father, John, had also left her mother for another woman.

Jennifer said, “One thing my parents’ marriage taught me – my mother, actually – is to be independent. She didn’t have her own life, other than her kids, so when my dad left, she was devastated. You have to have a career, a passion – a fallback position.”

She goes on to add, “No matter how small or ugly, there is always something to be learned, if only to say, ‘I forgive,’ though, of course, you still have your moments of not forgetting.”

Jennifer said she started to understand her mother’s behavior with her own divorce and other things that happened. She said of their reconciliation to Elle Magazine, “I’m thrilled. It’s so wonderful. And who knew that this (divorce) would be the thing to initiate this? It’s amazing. It’s like we get to reintroduce ourselves to each other. I’m just happy she’s still here…I’m not saying that there weren’t issues that took place that led to this. But I really see now whether it was judging her on how she handled her separation or her situation, but they didn’t have the advantages that we have with therapy, with self-help books.”

A few years later in 2008, Jennifer told Vogue Magazine that she and her mother were still in the middle of a slow, careful reconciliation “She’s changed,” Jennifer is quoted as saying, “She’s humbled with age….”

It’s difficult to know if this current reconciliation will last, but it’s hopeful, as Jennifer seems to want to try to understand her mother, forgive her, heal their relationship, and move on.