Reality star, Bethenny Frankel, talks to People Magazine about how she survived her painful childhood and estrangement from her mother and father, and found joy as a wife and mom. Bethenny is one of the stars of

Bravo’s The Real Housewives of New York City and is now in her own spinoff, Bethenny Getting Married?
which had the network’s highest series premiere ever.

…”She’s determined to be the mother to Bryn [Frankel’s 7 month old daughter] that she never had,” says [Jason] Hoppy [Bethenny’s new husband] of his wife’s upbringing. “I can see why she is so hard and unwilling to let people in sometimes. It really breaks

my heart.” Now Frankel is finally opening up about a past filled with addiction, neglect, and despair.

“I never had a true childhood,” Frankel says, sitting barefoot on the sofa in her roomy downtown apartment after nursing Bryn and settling her down for a nap. “There was a lot of destruction: alcohol abuse, eating disorders and violent fights,” she says. The only child of legendary horse trainer Bobby Frankel and his first wife, Bernadette, Frankel was 4 years old when her father walked out, leaving her with a mother who was “extremely volatile. She was never a mother to me.” She temporarily moved with her father to Los Angeles, but Bobby Frankel “lived a very hotshot life – drugs, young girls,” she recalls. “It wasn’t a life for a little girl. I  never watched cartoons. I was always at restaurants or the racetrack.”

After her mother married another horse trainer, John Parisella, Frankel returned to New York at age 5 and moved at least seven times over the next 10 years. Though she occasionally visited her father, he cut her off when her mother accused him of withholding money. “He said, ‘I’m washing my hands of the whole situation,'” Frankel recalls bitterly.

As for her mom, Frankel describes a “beautiful Michelle Pfeiffer lookalike” who, she says, “was always drinking,” behaved erratically and had explosive arguments with Parisella – who, Frankel says, sometimes became physical. She remembers her mother “smashing things: dishes, pictures, the TV – anything she could see,” she says. “The house would be in a shambles.” Sometimes a young Bethenny would hide in the closet to escape. Other times she was the one who called the police to stop it. The next day however she’d often hear them reconciling – in the bedroom. “I heard everything,” she says quietly. “It would make me so angry. It would kill me.” Despite all the chaos, she still calls Parisella “the only father I’ve ever known.” Though it was Parisella, she says, who taught her how to gamble at age 13, “he took care of me when my mother wasn’t around.”

It was Frankel who often ended up looking after her mother, who she claims was a severe bulimic. “She was someone you needed to take care of,” she says. She recalls helping clean up the bathroom – and her mom – after severe bouts of purging. “My mom would say to me, ‘Don’t tell your father,'” Frankel says sadly. When contacted by People, Frankel’s mother, Bernadette, now 59 and divorced from Parisella for more than two decades, confirmed that arguments with her husband sometimes resulted in calls to the police but denied ever smashing anything and further said she never had an alcohol problem or bulimia. Parisella, however, told People that Bernadette showed “signs of bulimia” and that she drank heavily…

…life no longer includes her mother or her former stepfather. Over the past 10 years, Frankel says she has barely even spoken to her mom. “I don’t want her to contact us and make it toxic,” she says. “I’m never going to want her in my daughter’s life.” Still, Frankel tries to be magnanimous: “She did the best she could. I’m sure she lived for me as much as I do Bryn, and there is something very frustrating and tragic about that.” 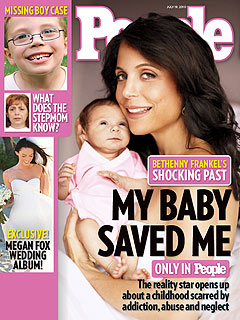 Meanwhile Frankel’s attempt to reunite with her biological father shortly before his death this past November was similarly frustrating. “He was done,” she says of a denied deathbed visit. “I didn’t exist to him.” The closure she’d hoped for came only after his death. “I found my own self-worth,” she says. “the pain was over.”

Now happier days lie ahead. As Frankel, Hoppy and baby Bryn lounge in pajamas, the couple’s occasional spats usually end in a Frankel-phrased wisecrack. “You have to be willing to make fun of yourself,” Hoppy says of life with his wife. “She never takes herself too seriously. It’s one of the things I love so much about her.” …

“Everything that’s happened is exciting, [says Frankel], but it’s nothing like having her [baby Bryn] in your arms. I just want to give her the life I didn’t have.”