Update: We are happy to report that after many years of being estranged, they have reconciled.

Below are two articles about the complicated relationship between Alice Walker and her daughter, Rebecca.

She’s revered as a trail-blazing feminist and, author, Alice Walker touched the lives of a generation of women.  A champion of women’s rights, she has always argued that motherhood is a form of servitude.  But one woman didn’t buy in to Alice’s beliefs  –  her daughter, Rebecca.

Here the writer describes what it was like to grow up as the daughter of a cultural icon, and why she feels so blessed to be the sort of woman Alice despises  –  a mother. 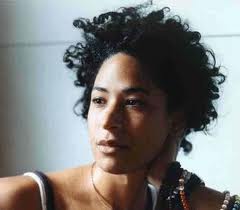 The other day I was vacuuming when my son came bounding into the room.  ‘Mummy, Mummy, let me help,’ he cried.  His little hands were grabbing me around the knees and his huge brown eyes were looking up at me.  I was overwhelmed by a huge surge of happiness.

I love the way his head nestles in the crook of my neck.  I love the way his face falls into a mask of eager concentration when I help him learn the alphabet.  But most of all, I simply love hearing his little voice calling: ‘Mummy, Mummy.’

It reminds me of just how blessed I am.  The truth is that I very nearly missed out on becoming a mother  –  thanks to being brought up by a rabid feminist who thought motherhood was about the worst thing that could happen to a woman.

You see, my mum taught me that children enslave women.  I grew up believing that children are millstones around your neck, and the idea that motherhood can make you blissfully happy is a complete fairytale.

In fact, having a child has been the most rewarding experience of my life.  Far from ‘enslaving’ me, three-and-a-half-year-old Tenzin has opened my world.  My only regret is that I discovered the joys of motherhood so late  –  I have been trying for a second child for two years, but so far with no luck.

I was raised to believe that women need men like a fish needs a bicycle.  But I strongly feel children need two parents and the thought of raising Tenzin without my partner, Glen, 52, would be terrifying.  As the child of divorced parents, I know only too well the painful consequences of being brought up in those circumstances.  Feminism has much to answer for denigrating men and encouraging women to seek independence whatever the cost to their families.

My mother’s feminist principles colored every aspect of my life.  As a little girl, I wasn’t even allowed to play with dolls or stuffed toys in case they brought out a maternal instinct.  It was drummed into me that being a mother, raising children and running a home were a form of slavery.  Having a career, traveling the world and being independent were what really mattered according to her.

I love my mother very much, but I haven’t seen her or spoken to her since I became pregnant.  She has never seen my son  –  her only grandchild.  My crime?  Daring to question her ideology.

The Color Purple brought Alice Walker global fame, but her strident views led to an irreconcilable rift, her daughter tells.

In the mid-1980s, The New York Times ran a profile of the American writer and activist Alice Walker.  Her novel, The 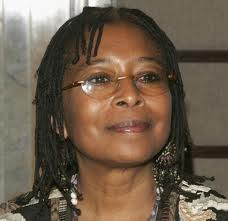 Color Purple, had won the Pulitzer prize and was being turned into a film by Steven Spielberg.  The article was illustrated by a photograph of Walker sitting on her teenaged daughter’s knee.  It was meant to be a “fun” picture; but, in retrospect, according to Rebecca Walker, the photographer unwittingly portrayed the true nature of her relationship with her mother.

Alice Walker was, and remains, an icon of the American civil rights movement.  “People adore her. I can’t tell you how many people have said to me, ‘Your mother saved my life’ and ‘I have an altar to your mother in my bedroom’.  They feel a connection to her and revere her greatly,” says Rebecca.

Walker’s success as a campaigner was to her detriment as a mother.  Like Dickens’s Mrs Jellyby, who neglects her home and her children as she directs her energy towards the poor of Africa, so America’s icon often went to feminist meetings and rallies and left Rebecca to fend for herself. Her daughter experimented with drugs and became pregnant at 14.

“My mother did a lot of leaving to go to her writing retreat, which was over 100 miles away — so she’d go there and leave me a little bit of money, leave me in the care of a neighbor,” recalls Rebecca, now 38.

“When I was pregnant at 14, I think it was because I was so lonely that I was reaching out through my sexuality.  My mother’s a crusader for daughters around the world, but couldn’t see that her own daughter was having a difficult time.  It was me having to psycho-emotionally tiptoe around her, rather than her taking care of me.”

Walker is furious with Rebecca for making such sentiments public, and mother and daughter are estranged with little hope of reconciliation.  Rebecca has a three-year-old son, Tenzin, whom her mother has never seen.  Their last meaningful exchange, during Rebecca’s pregnancy, ended in Walker sending a terse e-mail in which she resigned from “the job” of being her mother, and told her that in any case their relationship had been “inconsequential” for years.

The depth of her anger was such that she refused to budge even when Rebecca had a difficult birth and Tenzin’s life hung in the balance in a special-care baby unit.  “My father called her to tell her what was happening.  He couldn’t imagine that she wouldn’t run right over . . . In some ways, I wanted her to — but in other ways, I didn’t.  I knew she wouldn’t be able to be there for me in the way I wanted.  It would be problematic.”

Rebecca Walker’s denunciation of feminism and her mother Alice Walker has a lot to teach us about the choices women make and the daughters who judge them.

Recently, London’s Daily Mail ran an article based on an interview with writer Rebecca Walker, daughter of greatly beloved “Color Purple” author Alice Walker, about her relationship with her mother that saddened me enormously. 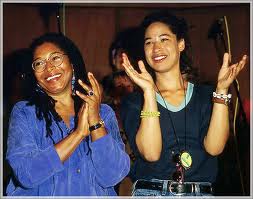 In effect, Rebecca accuses her mother (with Rebecca in happier times at right) of being a cold, selfish, child-hating feminist, who wanted nothing to do with Rebecca (or, really, with motherhood) while Rebecca was growing up, even less to do with her when Rebecca became pregnant, and then, nothing to do with Rebecca’s son, who is Alice’s only grandchild.  According to Rebecca, her mother even cut her out of her will. Rebecca guesses that her “crime” was “daring to question her [mother’s feminist] ideology.”

Rebecca (who is, herself, one of the most prominent faces of third-wave feminism) describes a neglectful, overly permissive and mainly absent mother, and she describes a joint custody arrangement in which she spent two years with each parent — in Rebecca’s view, a “bizarre way of doing things.”  I agree. According to Rebecca, when she first called her mother to tell her that she was pregnant and that “she’d never been happier, [Alice] went very quiet.  All she could say was that she was shocked.  Then she asked me if I could check on her garden.  I put the phone down and sobbed — she had deliberately withheld her approval with the intention of hurting me.”

Ah, Rebecca.  My mother, a traditional stay-at-home mother, also withheld her approval when I told her I was pregnant. Hallmark greeting cards aside, this is not an uncommon dynamic between mothers and daughters, and it can get a lot worse: For example, mothers can savagely criticize their daughters’ child-care practices, sue for custody of their grandchildren or testify against their daughters in court on behalf of ex-sons-in-law.  They can also refuse to relate to their daughter and their grandchild.

Still, Rebecca’s interview is too sad to bear, and although I, too, have written about my troubled relationship with my mother, I did not have the heart to do so in a major way while she was alive.  I waited until after her death to do so — and still I feared that I was both committing a sin and tempting fate.  Exposing your mother’s nakedness in public, breaking publicly with the only woman who ever gave birth to you, is a tabooed, ungrateful, desperate, perhaps dangerous and always complicated act.