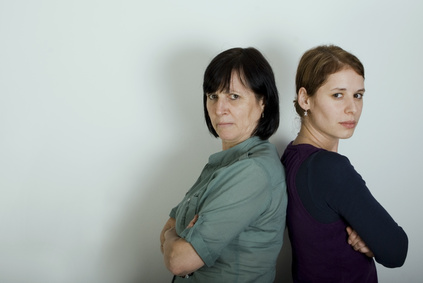 A great many mother daughter relationships feel about as healthy as a swig of beer coupled with a joint after downing some cough syrup with codeine. They are terribly strained for years, and end up resolving themselves to a chronic stand off usually during the daughter’s thirties or forties, where the relationship can remain steadfast and indignant for the rest of either one’s natural life. How depressing.

The much less depressing news is that it doesn’t have to be this way. In some cases, it takes a lot of effort, but not always. Sometimes just a few simple changes can completely turn around a skewed and ailing relationship between the women of the family. The bottom line ends up being pretty simple. Most mothers truly love their daughters. And most daughters truly love their mothers. It’s just that between all that love there is a great big heaping helping of demolish me stew and a side order of not quite good enough carrots.

History and the research provided from years of therapy couches have proven that in many cases, mothers are much more critical of their daughters than their sons, at least openly and visibly and certainly audibly. This is most obvious in households with only two children; one boy and one girl. Of course, mothers can be critical of anyone, it is part of their job. But in a recent survey, 68% of women between the ages of 18 and 35 felt their mothers resented them for not being a specific way or worse, a specific person while 36% of women between the ages of 36 and 56 felt this way. Only 23% of women over the age 57 felt their mothers resented them for their life choices and their person. However, this statistic only takes into account the participants of the survey, which included a high number of people in therapy. The numbers could be a little off, but probably not that much.

Why? Why is the mother daughter relationship so incredibly and unreasonably strained?