First Look: Why Drew Barrymore Didn’t Invite Her Mother to Her Wedding

In 2012, Drew Barrymore and Will Kopelman were married in their backyard, surrounded by family and friends. One family member not in attendance, however, was Drew’s mother, Jaid. Watch as Drew explains her decision not to invite her mother and what it was like to have that conversation with her. Plus, find out whether Jaid has met Drew’s new daughter.

Drew Barrymore once made headlines for drug abuse, partying and even flashing late-night talk show host David Letterman on television. So what will Drew tell her daughter when she’s old enough to read about her mom’s past? Watch as Drew opens up to Oprah about what she’ll say and why Olive won’t travel the same path she did.

On September 26, 2012, Drew Barrymore gave birth to her first child, Olive Barrymore Kopelman. Watch as Drew opens up about what her own tumultuous childhood taught her about what kind of mother she wants to be—and find out why she says that, when Olive’s old enough, Drew will always be there right at 3 p.m. to pick her up from school.

Drew Barrymore Wins the Golden Globe and SAG Awards for her portrayal of Edie Beale in Grey Gardens, a movie that explores an unusual mother-daughter bond.


Drew Barrymore and Her Estrangement From Her Mother
Drew Barrymore has “no contact” with her mother. The He’s Just Not That Into You star legally emancipated herself from her parents when she was 17 and has barely spoken to her mom Jaid since. “My mother and I split ways when I was very young and have never really reconciled,”Drew has said.

Her relationship with her father – actor John Barrymore, who left before Drew was born and was absent for most of her childhood – was also difficult.The 34-year-old actress made peace with him shortly before he died of bone cancer in 2004 but is still sad their relationship wasn’t easier. As she told W Magazine, “He was so feeble, I could actually nail him down. He was such a flighty bird – unattainable and off doing his own thing. I’m sure it’s affected my relationships with men…I’m sure I’m sadder about it than I admit, but I accept that it was a lot easier than my mother’s and my relationship, which is more tumultuous.”

Despite her grief, Drew says her troubled childhood came in handy when she was filming the movie Grey Gardens.Drew plays Edie, a devoted daughter who gives up her life as a socialite to live in squalor with her mother.Drew said, “I was excited to bring my own pain to something. I mean, contrary to my happy-go-luckiness, I have so much darkness in there…I got institutionalized as a kid, and I felt like I was back there. A lot of times I found myself unhappy and isolated, and the only other time I felt that way was when I was in there.”

The Beales of Grey Gardens – A Complicated Mother-Daughter Relationship

I had never really heard about the real life “Big” and “Little” Edie Beale, aunt and cousin to Jackie Bouvier Kennedy, until the popularity of the play, Grey Gardens, and then the recent HBO movie of the same name. The Broadway Show won several Tony Awards a couple of years ago, and now the movie, starring Jessica Lange and Drew Barrym

ore (pictured on the right) as this eccentric mother-daughter duo has been scooping up awards as well, including one for star, Drew Barrymore, at the recent Golden Globes. I, therefore, felt it was a film worth watching and commenting on since it so famously deals with the mother-daughter relationship.

I just finished watching it and am a little shell-shocked to be quite honest. It struck me as very sad how lives can go so astray when they originally hold such promise. And you can only wonder how things can change so much over the years. These are definitely very interesting “characters” (and they ARE characters) and their relationship is more complicated than I can even fully comprehend.

What happened to these two women and how did their relationship mold them into who they became?

You don’t learn much about either woman’s childhood in the film in order to try to fully understand them. Edith Beale, the mother, was the sister of Jacqueline Kennedy’s father, and I read in an article that Edith was the “black sheep” of the family. She had a love of the arts and seemed quite flamboyant and free-spirited. She also seemed to be very controlling of her daughter, Edie. Big Edie, as the mother became known, seemed to fall into some kind of mental illness as she got older and people began leaving her. Left on her own, her life seemed to go downhill.

In the movie and another article that I also read, it is mentioned that Edith lived alone for 30 years. I’m not sure when that happened, though, as her daughter still seemed quite young when she moved back in with her mother and continued to live with her until her death. That left me a bit confused.

While the younger Edie claimed to want to escape to New York and have a life in the theater, she was continually drawn back to her mother. I wasn’t fully clear whether it was due to her mother’s pull on her as much as by Edie’s own weaknesses and fears. Her mother definitely had a strong pull over her, but Edie moved back into the house when her affair with a married man in NY went bad and then she never left again until her mother died many years later. She seemed to suffer from the same mental illness that affected her mother and I read articles that mention that they fell into a “folie a deux” or “madness shared by two.” Certainly, they lived in squalor and, yet, didn’t even seem to be aware of it. They eventually lived in their o 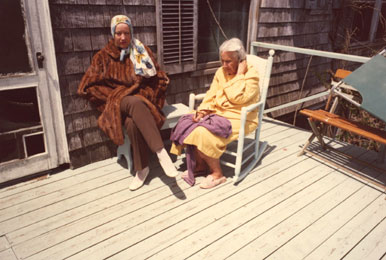 wn little fantasy world together. (The real Beales pictured on the left.)

I found it interesting at the end of the movie when the younger Edie wants to go to the film premiere of the documentary that was made of their lives and her mother tells her she thinks it would be a mistake. She says that Little Edie just doesn’t know how other people see her. But that was also true of the mother. She seemed totally unaware of how others saw her as well.

Looking at this mother-daughter relationship I found it to be quite sad. Besides the eventual mental illness which seemed to have taken over both of them (hereditary or psychological?), there was also probably a lot of jealousy between them. I’m sure Big Edie didn’t really want Little Edie to outshine her and have the life she, herself, was never able to have. Therefore, she pushed for her to get married, as she had, and was not at all supportive of Little Edie’s desire to pursue a career in acting and dancing. Little Edie admitted years later, though, that she could have left Grey Gardens any time. But could she really have?

At the end of the film, a quote from the younger Edith Beale was flashed on the screen, and it amazed me. Despite the seemingly unhealthy relationship this mother and daughter had, Little Edie was quoted as saying, “My mother gave me a completely priceless life.” I guess what’s seen as healthy or unhealthy may be in the eyes of the beholder. What love and happiness looks like may be an individual thing. How can we judge another’s situation? Maybe it’s best to have no judgment. Did this mother-daughter duo find happiness in their life together or is this just a sad tale of a totally dysfunctional bond? In the end, that may depend only on your own perspective.