Skip to main content
Home > Help Me! > Topics > Forgiveness > A Daughter’s Story of Forgiveness and Healing

My mom passed away on Wednesday morning at 8:59 am, March 14th, in the midst of her long battle with cancer. Exactly 1 day and 4 hours after the anniversary of my father’s passing 15 years earlier.  I had the honor to be by her bedside leading up to her big transition, and to be with her as she released her final breath.  She was surrounded by 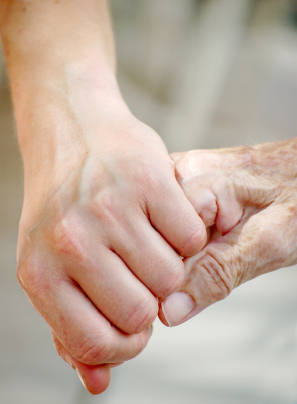 her children during the final hours of her life.  We stroked her hair, massaged her hands and feet, rubbed her swollen belly, swabbed her parched lips with a tiny wet sponge, and told her how much we loved her over and over and over. It was an experience that left me all blown open to the mystery of life and filled with a wild awe at the transcendent force called love.  In a family that has seen more than its share of sorrow, conflict, confusion and separation, finally here was an experience that united us all in a way that left no doubt that love is, in fact, stronger and more powerful than any other force.

After a lifetime of confusion, doubt and regret – interlaced with great love, passion and deep family bonds, my mother at last made peace with life – and death – in her final days, and I was graced to be the one who shared the long final nights with her as she wrestled with her demons and prepared to move into the next adventure.  My sister and I were on a schedule by her bedside, so that she was never alone, and I had volunteered to take the night shift.  Fortunately all of the personal history between us was dissolved during the time we spent together last year, and by the time she passed on, we were just two souls sharing one of the most intimate gifts that life has to offer.

No longer mother and daughter, no more regrets, disappointments or resentments.  Just two hearts opening more and more as the great mystery of Death moved quietly into the room and waited patiently for her to accept his outstretched hand.

Throughout my life, my mother always seemed moody, in and out of depression with a bit of a predisposition to narcissism, self-centeredness and much exaggeration.  She was prone to temper tantrums and in general was hard to live with.  But she could be warm and loving — and always insisted upon how much she loved me — though her mood-swings and emotional behavior were definitely more predominant.

My mother could be extremely witty, however always quite insecure about her Philippine accent and lack of life experience.  Bitterness and depression seemed to be her anchor.  Her marriage to my father seemed to be a constant source of frustration and regret.  Our relationship waned and finally fizzled as I grew into adulthood and middle-age. Finally, after much heart ache and forgiveness my mother and I enjoyed each other’s company during her final years, though mom didn’t really remember much from moment to moment.  The irony of life.

When my father died years ago my mother was understandably falling apart.  By this time, I had painted a picture of her as this vicious, mentally ill woman…this crazy woman!  What kind of woman was this?  What kind of daughter was I to be thinking such thoughts?

After a prolonged hospital stay and the discovery of her cancer, I was told that my mother probably also suffered from dementia.  I really do believe to some degree that her dementia was somehow always lurking in her brain, perhaps already influencing her behavior many decades ago.

Strangely enough, as both the cancer and the disease progressed and mom went into an assisted living home — she became generally more pleasant, even-tempered and positive.  She smiled often, loved going to observe and chat with all the widowed men and charmed the heck out of most of the staff much of the time.

She also had down days where she griped at her roommate whom she didn’t care for and asked about her grandchildren who she missed terribly.  But all in all many of her days were good ones.  She occasionally became very aware of all that she has lost – her freedom, her home, her husband, her financial struggles, her beloved pets, time not spent with her granddaughters – those times were indeed hard to observe her going through.

However, last year, I was finally able to appreciate a gift I had received at birth but had never unwrapped.  I transformed my relationship with my mother.

My teenage years were painful, the dysfunction went deeper than anyone could imagine.  Due to other dynamics in our family, there were several factors at play which severely undermined my relationship with my mother until the two of us were almost strangers.

My mother was just not the kind of woman who put her children first.  She was never there for anything that I can recall.  I would see other girls having a close loving relationship with their moms.  I resented the fact that she was just not capable of that.  I grew up feeling that I had no mother; I cooked my own meals, packed my own lunches, cleaned, and took care of my sister.  I never had a childhood like the other kids had.  I never felt she loved me.  When I was old enough I told her that I didn’t respect her and that I would leave home as soon as I was old enough.  I believe she resigned herself to the fact that her eldest daughter was lost to her.  Over the years we stopped the cattiness and wars and settled into a kind of cold artificial politeness.