Mothers vs. Daughters: Why Can’t We Just Get Along?
WebMD Feature from “Good Housekeeping” Magazine
By Jennifer Allen, www.WebMD.com 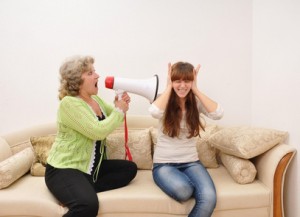 You love each other…yet one of you is always saying the wrong thing!  How to improve the conversation-and the relationship.

I sometimes think of my daughters as my own personal Thought Police.  Both are deeply attuned to everything I say and how I say it.  Recently, my older child, who’s 21, came home for a visit:  “Hi, honey,” I said, giving her a hug as she walked through the door-to which she replied, “Why aren’t you happier to see me?”  I thought to myself, How did she pick up on the fact that I’m distracted?  What I also thought was, Can’t I get away with anything?

In her book, You’re Wearing That? Understanding Mothers and Daughters in Conversation, Deborah Tannen, Ph.D., describes the intense connection between mothers and daughters-and how we press each other’s buttons.  A best-selling author (You Just Don’t Understand) and a professor at Georgetown University, Tannen had a sometimes strained relationship with her own mother, who died almost two years ago, at 93.  “My mother,” says Tannen with a smile, “was kind of an extreme case of needing to be the center of attention.”  Over tea at her home in suburban Virginia, Tannen answered questions and described how she finally learned to appreciate her mother, to whom her book is lovingly dedicated.

Why do mother-daughter conversations often seem so complex and explosive?
Deborah Tannen:  Women talk more than men.  Talk is the glue that holds a relationship together for us.  But the more you talk, the more chance there is to put your foot in it.  And unlike men, women love to exchange secrets and talk about their troubles.  So we make ourselves more vulnerable.

What are the hot-button topics for mothers and daughters?
DT:  I came across so many examples of mothers making critical remarks about their daughters’ hair.  After all, isn’t it a mother’s prerogative, if not her obligation, to make sure her daughter looks her best?

But where the mother sees caring, the daughter sees her mother’s scrutiny as confirming her own fears-that she’s flawed. If a mother says that her daughter should lose 15 pounds, the daughter thinks she should probably lose 20.  So it’s important, as a mother, not to offer advice or criticism-especially about appearance-unless you are asked.  And even then, be careful. And don’t forget the power of praise.

A lot of grown-up daughters feel that their mothers are trying to meddle in their lives, with too many comments, too many questions. Is that true?
DT:  A mother may ask a question or say something because she’s trying to connect with her daughter.  But the daughter hears the remark as trying to butt in.  In researching the book, I heard from so many mothers:  “I can’t open my mouth! Why is she so sensitive?”  The mom is thinking, I see what she should do-it’s so obvious-but I can’t get her to do it.  One of my students broke up with her boyfriend and was upset and thought that maybe her mother might have a unique perspective.  So she told her, and the mother gave her point of view, which the daughter appreciated.  But then the daughter realized why she did not do this more often-the mother kept bringing it up.  “How are you feeling?  Have you met anybody else interesting?” she would ask.  Finally, the daughter had to say, “Please don’t bring it up; you’re making it harder.”  Her mother was hurt.