Amy Grant on being a caregiver to an elderly parent… 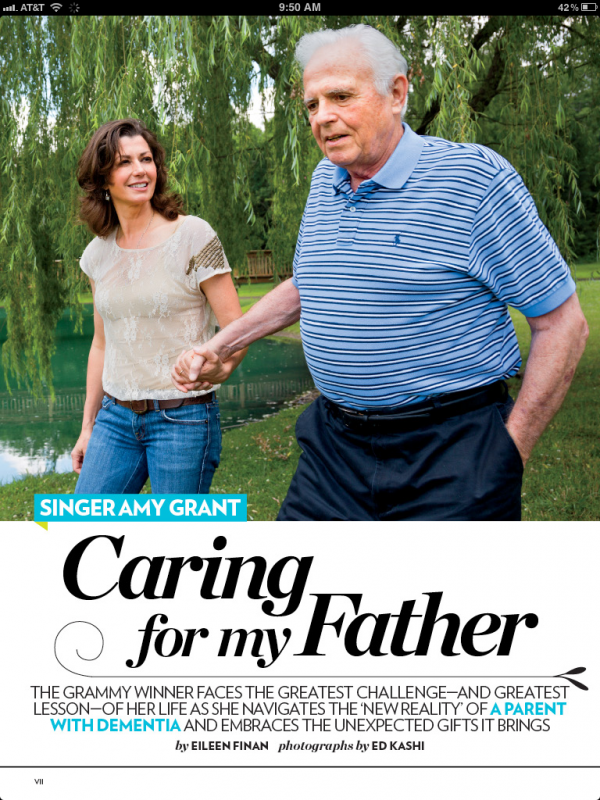 Amy is featured in this week’s PEOPLE Magazine discussing the greatest challenge – and greatest lesson —  of her life as she navigates the ‘new reality’ of a parent with dementia and embraces the unexpected gifts it brings.

The article is written by Eileen Finan for People Magazine and we want to encourage everyone to go pick up a copy and read the article in its entirety (available in almost all places that sell magazines).

Between preparing kids to leave the nest, caring for elderly parents and planning for retirement, Amy knows first-hand the difficult decisions facing baby boomers. That’s why she is partnering with the National Association of Insurance Commissioners (NAIC) to encourage boomers to educate themselves and plan ahead.

She has sold over 30 million records, won six Grammy’s and several Dove awards, appeared on every major talk show, hosted a reality TV show, and now has her own star on Hollywood’s Walk of Fame.  While Amy Grant may not seem like the typical baby boomer at first glance, she’s no different than countless

other adults who provide care and support for an aging parent.   Unfortunately, long-term care needs are part of the retirement planning process that often go unaddressed until it’s too late leaving the financial and emotional burden on family.

“My Dad had a very fast onset of dementia,” said Grant. “I remember saying, ‘Dad I feel like we’re in a room with locked windows and doors, and it’s filling up with water.  It’s only at our knees right now but it’s going to go over your head and it’s going to happen fast.”

Amy was very candid about this personal experience and, like many of her songs, thoughtful and patient in her delivery.  “With an aging parent,” she said, “it’s important for the people affected emotionally and financially to have consistent conversations… discuss what’s going to happen next; and think creatively for ways to meet their needs.”

She shared her own experience, not uncommon to many families dealing with parents who have dementia:  “My parents enjoyed drinking a glass of wine together in the evening but, because they both had dementia, they would lose track of how many Dad had poured for Mom and, consequently she had more than one fall.  That was very much unlike her, and so was the phone call I received one night when my Mother wandered out in the cold rain without shoes and dressed only in her night clothes.”

With dementia and other debilitating illness such as Alzheimer’s, the situation tends to worsen over time, often requiring families to make plans to take care of an affected loved one.  Unfortunately, there’s no easy way, emotionally or verbally, to ask a family member in the throes of such illnesses to relinquish control of their lives.

The Talk
One day when Amy’s parents were having their preacher and his Mother for dinner, Amy and her sisters agreed to address their growing concerns with their parents, ultimately asking them to assign power of attorney to their two eldest daughters.  “So much of our lives seemed to happen around the dinner table that it felt more like a party that was just getting bigger,” said Amy as two invited attorneys took part in the discussion.

I asked Amy how that event was received by her parents.  She paused for a moment, reliving the personal and emotional strength it took to deal with the situation, and said, “Everyone gets choked up trying to do things for our parents that are hard, but we love them so much.  I simply said, ‘Daddy do you trust us?  Tell us what you want and trust us to carry out your wishes.’  He took it all in and, being still quite conversant at this time, he looked at the preacher and asked him if this was the right thing to do. The pastor replied, ‘You and your wife have raised your daughters to be ready for this task.’”

Her Life And Music
During my conversation with her, Amy said that each of her sisters play an important role in the care of their father and jokingly added, “My sisters tend to hand me the emotional stuff when it comes to conversations with our parents’ care.”  That prompted me to ask her how her music career had prepared her for her father’s current situation and needs, and how she was dealing with it.

“I’ve learned not to feel uncomfortable talking about things that matter,” she said.  “I think the most compelling songs have some emotional authenticity … and you know you’ve achieved that genuineness when someone says, ‘Oh, I felt just like that’ or ‘I’ve experienced that and you articulated it just the way it happened to me.’”

“What I say in a song matters so much more to me now than it did even 10 years ago,” said Amy.  “I  don’t feel like people take the time to listen to music, so if you’re going to write a song that makes someone say, ‘I want to hear that again,’ it needs to move them in a very powerful way on some level.  The songs I have written that people tend to react most strongly are those that have been inspired by really tough situations, which is probably why my sisters said ‘We’re gonna let you tell Daddy that he needs to sign over power of attorney to us.’”