Dear Visitor to Motherrr.com, below is a story that, at first glance, does not seem to fit our mission of helping to heal the adult daughter/mother relationship. There is really no mention, specifically, of an adult daughter in the story and there isn’t any real conflict so it seemingly doesn’t belong on the website…that being said…once you know the backstory you will see that it most certainly does fit on the website!

You see, dear Visitor, the true story below was written by my mother. And if you know anything about the process that my mother and I have been through to heal our relationship (perhaps from reading my blog posts), then you will know that it is a big deal. I should amend that to say, it was the conversation about including the article on the website that was the amazingly big deal. My mother insisted that it did fit and I insisted that it didn’t.

Several years ago this conversation would have dissolved into “I never should have called,” “Stop trying to control me,” phone receivers slamming down and tears. BUT I’m beyond delighted to share that none of that happened! Through all the research, work, compassion, forgiveness, more work, writing, reading, even more work and using the strategies Barb and I have put together for healing daughter/mother relationships, my mother and I were actually able to listen to each other without it escalating. That being said, even though we were able to be kind to each other, the conversation kept going around in circles with her insisting it did belong and my insisting that it didn’t. Finally, I jokingly said, in some frustration, “Mom, I’ll only put the article on the website if I can put a disclaimer on it that I’m only doing it to keep the peace with my mother”–my mother replied with delight “that works for me!”

And there you have it dear Visitor, the story behind the story and why it definitely belongs on the website. ~Laurie

Henley and The Invisible Tribal Blanket
By Marlou Newkirk

My family gave me a surprise birthday party this past June. I was overwhelmed as members came from: Savannah, Charleston, Boston, New York and locally; there were 25 of us in all. I had always wanted a surprise party and, suddenly, there it was.

When I went into the party room it smelled of the perfume of flowers – lots of them, all my favorites. A vase of pink peonies sat on a side table. On the main table was a bowl of red and white roses and at my special seat was a bouquet of lilacs and baby’s breath.

There were birthday signs, streamers, and glitter on the table, silly hats and noisemakers. It was a smashing setting.

One happening stands out in my mind and will forever. Among the guests were my grandniece Abby and her two-month-old baby girl, Henley. They had traveled from Charleston. Henley looked beyond adorable in a pink and white checked dress and a band in her hair with a pink rosette on it.

As is wont the custom in these circumstances, Henley was passed around from person to person (a custom 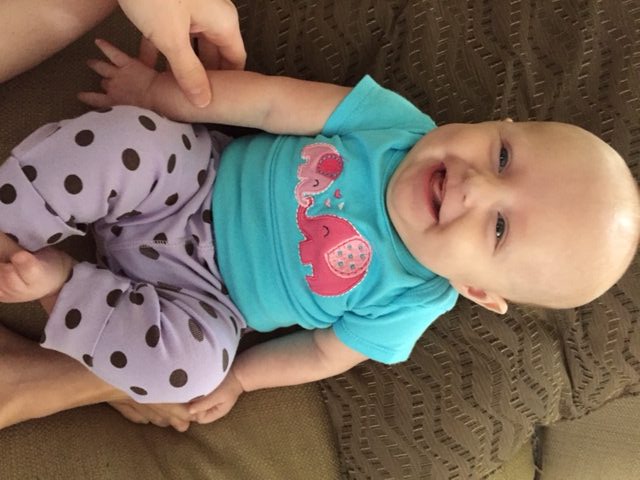 probably dating back to cave people). At first, Abby kept a watchful eye about where her baby was and if she was being held right. As the party went on and Henley seemed to be fine, Abby began to relax. After all, she had known most of the people in the room since she herself had been two months old.

Abby was then able to spend time with her sister, Leslie. They love each other dearly. They live in different states now so when they get to see each other it is special.

A particularly sweet moment occurred when my 15-year-old grandnephew, Gordon, held Henley. At first he looked like he was afraid he would break her but then she did the wonderful thing babies do. She wrapped her fingers around Gordon’s finger. He seemed fascinated. He then passed her to his 13-year-old brother, John, where she snuggled into his shoulder.

It was while she was being held by her great aunties, strong women who had overcome much in their lives, that I began to think, wouldn’t it be wonderful if by some kind of osmosis Henley could absorb from everyone their strengths, passions, kindnesses, compassion, wisdom, joys, life experiences.

It would be wonderful, also, if she could absorb some of their determination and their resiliency. I stumble, I fall, I get up and keep on walking. So, that at the party’s end when she was handed back to her mother, she was wrapped in an invisible tribal blanket.

Just as this tribe had come to honor me so, too, would it honor Henley. And when life got too much for her, and it does and it will, she could knock on the door of anyone who had been at the party and they would open it and say, “Come in, Henley, have a cup of tea and rest awhile.”

9 responses on “Henley and The Invisible Tribal Blanket”