“Always forgive your enemies, nothing annoys them so much.” – Oscar Wilde

This is a great quote and a fantastic concept. Forgiveness doesn’t sound easy, especially if you feel you have been 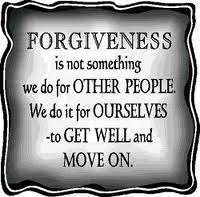 unnecessarily hurt or wronged. However, it is the ONLY way to inner peace. If you cannot forgive, you cannot let go of the negative emotions inside you. The pain will eventually rot from the inside out and will affect every area of your life.

Why let someone else’s actions hurt you for any longer than they already have?

Think of this way, if someone hurt you, say 5 years ago – do you think that they have sat and wept for the past 5 years about how they wronged you? It’s very unlikely, or they would have made an effort to gain your forgiveness. Let go of the past or the past will destroy YOU.

In my early 20’s, I used to think of ‘forgiveness’ as a religious idea. Something that people involved in a religion would do for us ‘sinners’. When actually forgiveness isn’t about the other person – it’s not about THEM being forgiven, it’s about YOU being able to let go. This is the point of forgiveness. It doesn’t mean that you think they are an ok person, or that you believe that they’ve changed or that they would never repeat their actions. All it means is that you are willing to let go of your negative energy connected to that person or event.

The more severe the wrongdoing, the more important it is for you to forgive and let go. If you truly believe that you are unable to let go of the past, I highly recommend using one of the energy healing techniques such as EFT (tapping), Emotrance, TAT or ZPoint. It will make a huge difference to your life, once you can let go of the trapped negative energy.

Do it now before it is too late. Negative energy will eventually manifest itself as severe issues such as depression, anxiety, a phobia or PTSD and even physical illness.

This person has already destroyed your past – are you going to let them hurt your future? The choice is yours.

Mel Trudgett is a self development expert and the owner of Healing That Feeling. Her unique self development program has helped people from all over the world to easily overcome their stress, phobias, anger, depression, trauma, limiting beliefs and helped them to make big changes in their lives. Visit www.healingthatfeeling.com