Skip to main content
Home > Help Me! > Topics > Body Image > My Mother was the Fatter One

What happens to the bond between a daughter and her mom when one of them gets thin and leaves the other behind?

My mom happened to be in town, visiting my home near Washington, D.C., for the annual profusion of cherry blossoms, and this refrain followed us everywhere we went.  It made me smile—through gritted teeth.  It’s true that she and I share the same blue eyes, the same genial Midwestern countenance.  We even have the same unruly swirl of hair at the nape of the neck.  But on this visit, we looked more alike than ever:  For the first time, we were nearly the same size.

My mother has been overweight for as long as I can remember, not obese but a matronly plump.  In the rural town where I grew up, most moms looked like she did:  farm wives with substantial bosoms and hips.  At church picnics, she and her friends commiserated, seemingly surprised to find themselves in these large, soft bodies, so different from the lithe girls they’d once been.  “It’s so hard after you’ve had children,” my mother would say, patting her belly, and the others would nod, glancing at us kids meaningfully and, I thought, a bit accusingly.

I’ve always taken a certain comfort in having a mom who is not thin.  Unlike my friend Kelly and her tiny-skinny mother, who began raiding her closet when Kelly was in seventh grade, my mom and I were never in competition with each other.  (After seeing her mother in one too many of those swiped minis, Kelly became the most conservative dresser in junior high.) 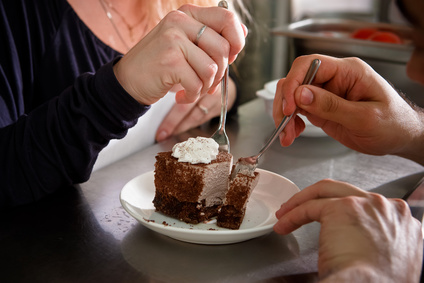 My mother and I didn’t share clothes, but we did share food.  My dad was a meat-and-potatoes man, so she and I bonded over treats we considered “girly”—snack foods such as cheese and crackers that you could reach for again and again while talking across the kitchen table.  Along with my sister, we’d watch TV on the couch, dipping into giant bowls of buttered popcorn.  We also baked cookies, cupcakes and pies; one snowy winter we baked nearly every day, trading the dirty drifts piled outside for white, silken mounds of sifted flour in our warm kitchen.

Some nights, though, my mother ate alone.  I recall her sitting beside the kitchen window with a head of cauliflower as dinner simmered and the passing cars turned gray in the twilight.  She’d break it into pieces and chew quietly until it was gone.  On a particularly bad day, she might switch the cauliflower for a bag of chips or chocolate cake—just a slice here and there—until that disappeared, too.  My sister and I might beg a bite or two, but somehow we understood that this was my mother’s time and she wasn’t in the mood to share.  I could sense even then that my mother was unhappy, and I believed it was my fault.  After all, I’d seen the photographs of her, thin and smiling, in her size 6 wedding gown.  I’d heard her words to me:  It’s so hard to be thin after having kids.  Clearly, if she hadn’t given birth to my sister and me, she wouldn’t be overweight.  She wouldn’t be stuck in a family that wore her down, coping as she did with two eternally squabbling daughters while working full-time as a library director.  She would still be that beautiful, joyful bride.