Veronica’s jealousy drove one daughter to run away at 14, and the other to write a darkly accusing memoir.  Then Maria Flook and her sister gave their dying mother one more chance.

The Last Chance for Peace

The day of our mother’s death, my sister and I went to see her at a retirement community outside Wilmington, 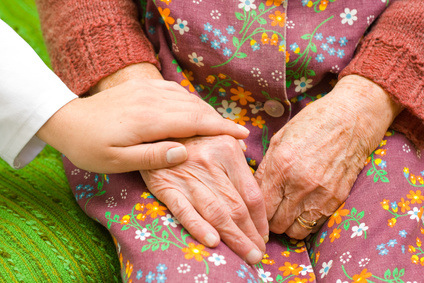 Delaware.  My older sister had been estranged from our mother for some time and had only recently started to chisel through the ice shelf that separated them.  Often, she would throw up her hands and say it was impossible.  But our mother was failing fast, and at the last minute, Karen agreed to visit.  I had always been the go-between, and this final reunion would be an important bridge for all of us.  “It’s easier to burn them than to build them,” my sister said.  I told her that maybe it wasn’t too late to make peace.

I met Karen at the entrance of the Stonegates luxury condominiums, a lavish bunker for the aging well-to-do.  I noticed my sister’s beat-up car, as did the security officer at the front kiosk, who looked her over for longer than he’d interrogated me when I had arrived in a late-model airport-rental car.  Her clunker was an eyesore in their parking lot.  The ceiling fabric had come loose to reveal the yellow foam insulation underneath.  It was another reminder of how her life was a little more shabby than most people’s.  Because our mother had favored me, I sometimes thought I must be responsible for each cash deficit that befell Karen.

When Karen got out of her car, her streaky blonde hair made her look sort of like Meg Ryan, but her face was more haggard than ever.  She told me she’d been having some thyroid trouble, but I wondered if it could be something more serious.  She never complained about her problems, and I didn’t ask.  We embraced and I said, “How can you see out your rearview mirror with that fabric hanging down?”

“I taped it, but it keeps coming loose,” Karen said.

“We should just tear it off completely, don’t you think?”

So our first item of business that day was to strip the interior ceiling from her old Mercury Marquis.  We yanked and tugged until it peeled away.  I remembered when we had shared a room and Karen had taught me how to make my bed, careful to fold the sheet down so its hem was even.  My sister had few safe havens in life, and her car was where she would escape after our ordeal with our mother was over.  Now, without the ceiling fabric, it seemed even seedier.

I waited while she stamped out her cigarette, in no hurry to go inside the building.  We were nervous at this milestone — the impending death of our matriarch, the femme fatale and dangerous axis of our lives.  So much harm can happen in a lifetime, how would we ameliorate all our wrongdoing in a mere teatime?  After decades of our mother’s indifference toward her, it was amazing that Karen had even showed up.

When she was 14, my sister vanished.

Now struggling with end-stage liver disease, our mother had been moved from her pocket-of-posh apartment to the “Life Care” unit.  We found Veronica propped up in a hospital bed.  I thought, this is the sterile gateway most people are forced to depart from, and I’d rather die on a busy street corner.  I was surprised to see that her lovely shoulder-length hair had been clipped by nurses, who thought a military hairstyle more appropriate for someone waiting on the tarmac of The Beyond.  Seeing her with shorn hair instead of her Lauren Bacall coiffure, I remembered the first time she was hospitalized, for heart surgery.  She insisted that I go home to get a negligee from her armoire.  She hated to wear a hospital johnnie.  She had been a coquette through and through, even in the O.R.

Veronica was happy to see me, but when Karen entered she blinked as if a pepper-ball deterrent had exploded in her face.  Recovering her composure, she said, “Oh. It’s you. What a nice surprise.”

“I didn’t expect the casino would let you off,” Veronica said.

“They’ll dock my paycheck, but I guess I’m here now.”