‘My Mother Was Nuts’:  Penny Marshall Looks Back
Today Books 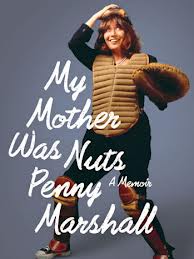 director and producer, Penny Marshall has had a remarkable life. In “My Mother Was Nuts,” Marshall talks about where she came from and the amazing journey it was. Here’s an excerpt.

No matter what it is that happens to us as adults — and as we all know, s__t does happen — we can usually trace the reasons back to the things that happened in our childhood. Here’s the short version of everything you’re about to learn: My mother was nuts. My father was boring. My older brother was funny. My older sister was girly. And I just wanted to play.

I still do. I attend basketball, football, and baseball games. I waste a stupid amount of time playing Angry Birds on my iPad. I watch movies. I talk on the phone. I’m just like I was as a kid. My whole childhood was spent pleading with my mother to play outside for five more minutes.

“But I can still see the ball.”

All the kids from my apartment building played together on the sidewalk and in nearby vacant lots. Popular games were stick ball, Skelly, Three Box Baseball, Hot Beans and Fried Potatoes, and I Declare War. It was fun. It was social. Boys and girls mixed. Age didn’t matter. If you could round up enough people for a game, everyone was happy, especially me.

I am not much different now. I have never wanted to grow up and stop playing. In many ways, I haven’t. In my work and in my personal life, I still try to maintain a connection to the sense of play that I remember from my childhood. Those experiences taught me the lessons that came in handy later in my life: Try hard, play by the rules, help your friends, don’t get too crazy, and have fun.

Through all the changes and the challenges of adulthood, I have never strayed too far from those golden rules or from that little girl with the ponytail and the overbite who wanted to keep playing for five more minutes.

Why would I want to be inside at home?

My mother was there. Her name was Marjorie, and she was known across the Bronx as the owner, teacher, and chief choreographer of the Marjorie Marshall Dance School. She had 360 students, and she was beloved by 359 of them. The one that didn’t love her unconditionally was the one who she compared unfavorably to all the other girls, the one who wanted to be outside playing, and the one who regularly heard, “Why can’t you be more like Lois Rosenberg?”

Lois Rosenberg took dance lessons from my mother. She was blond, beautiful, and she loved dance school. She was everything I was not. I was extremely skinny. I had a face like a monkey and an overbite that defied orthodontics three times. My study habits were poor, and I thought telling the truth to one’s parents was overrated. It was not for nothing that my mother referred to me as “the bad seed.”

In retrospect, my mother and I were more alike than we acknowledged. Blond and sassy, she was from the Bronx, the only child of Margie and Willie Ward. She played the piano and taught herself to dance, and then she began teaching the neighborhood kids how to dance. If she got A’s on her report cards, her father took her to the latest Broadway musical, and she adapted what she saw onstage for her own students. Though her technique wasn’t perfect, she knew how to entertain, and with kids as her stars, her recitals were crowd-pleasers.

She was in college when she met my father, Anthony “Tony” Masciarelli, a handsome, athletic young man majoring in advertising at New York University. He was a clever writer and cartoonist. He wanted to be a big wheel on Madison Avenue. To better his chances, he changed his last name from Masciarelli to Marshall and forevermore denied that he was both Italian and Catholic.

My mother didn’t give a s__t about religion or ethnicity, not then when they first got together, or anytime afterward. If he wanted to change his name, fine, she didn’t care. In him she saw someone who possessed the skills and smarts to be a good provider. She was also interested in his ability to draw and write. She wanted him to make programs for her recitals.

My father was no less guilty when it came to ulterior motives. He thought my mother came from a wealthy family that would help him into a comfortable life of commuter trains and country clubs.

As it turned out, both of their assumptions were wrong.

Later in their lives, my mother and father both kept a glass of water next to their beds and at night they put their dentures in them. Other than children, it may have been the only thing they had in common during their marriage. They married in 1932. My mother said that he fell asleep on their honeymoon, and that was probably the most romantic thing I ever heard her say about him.

After she died, I found some notes that she had typed to herself about the early years of her marriage. They revealed a time more difficult than I ever realized. The first one, written in 1932 following their three-day honeymoon, said, “Tony was rotten to me.”

She struggled with buyer’s remorse. “New Year’s Eve stayed home & in bed at 11:00,” she wrote. “Tony out several nights a week alone. Well, he married me against his will didn’t he? I practically forced him????”

That was news to me.

Life did improve. In November 1934, my mother gave birth to my brother, Garry. In January 1938, she had my sister, Ronny. She was very happy about becoming a mother. After my grandfather battled kidney problems and quit his job, they had to cut costs and moved into a two-bedroom apartment in the Bronx. But that seemed to work out.

My father started his own advertising business, The Marshall Organization, and my mother taught tap, ballet, jazz and acrobatics to neighborhood kids in a large room in the building’s cellar. She referred to it as the ballroom, and it may have actually been a ballroom back when the building was classier and the neighborhood as a whole was much fancier. I always called it “the cellar.”

As my father built his business and my siblings grew out of babyhood, my parents seemed to work out their differences, or perhaps they just surrendered to them and enjoyed a manageable peace. They entered Garry in a “Cutest Baby” contest sponsored by the New York Daily News, and they doted on Ronny, their adorable baby girl.

But the calm ended in early 1943 when my mother found out she was pregnant again. I was not planned. One night early in her pregnancy, as she was eating dinner, she started to bleed and thought she was going to lose the baby. Actually, she hoped that would happen. Later, in my teens, she said, “You were a miscarriage, but you were stubborn and held on.”

Such a loving thing to say.

Buy “My Mother Was Nuts”