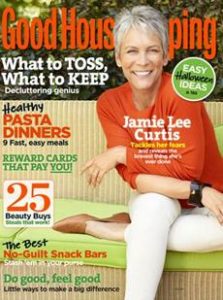 A highlight from her interview includes her answer to the question about whether there’s anything at which she’s ever failed:  “… I feel like a failure as a mother a lot, because despite my best efforts, I have replicated parts of how I was parented [that I didn’t want to]. Even though I vowed not to and felt like I was doing it so differently, in many ways I repeated some of the same problems.”

Below is an excerpt from an article Jamie Lee Curtis wrote for More Magazine.  In it she talks candidly about her mother, who passed away 5 years ago, and their relationship.  Her mother was Oscar-nominated film actress, Janet Leigh (of “Psycho” and “Bye, Bye, Birdie” fame). Her father was legendary movie star, Tony Curtis. Her famous parents were the Brad and Angelina of their day until they divorced when Jamie Lee was small.  Read an excerpt below:

…The life we had with Bob (Janet Leigh’s 4th husband to whom she was married for 40 years and helped raise her daughters) was as near to normal as you could find in Los Angeles. At our simple, ranch-style home—actually a remodeled pool house in Benedict Canyon, where Bob had lived as a bachelor, complete with dirt road and a donkey in the stable—we had big dogs, a big tennis court, a big yard, a big pool and a big family of girls as neighbors. There are thousands of photos from those years in which Janet looks happy, at tennis parties, fishing in Wyoming, skiing in Sun Valley, always showing her dazzling smile, everywhere, all the time. I idolized my mother, but despite all these smiling photos, I came to know that her life was not particularly happy.

There were reasons. Her father committed suicide at the peak of her career, I believe over the lending or losing of money; soon thereafter came her costly, public divorce from Tony. Because Bob and Janet both had emotionally and financially dependent parents, 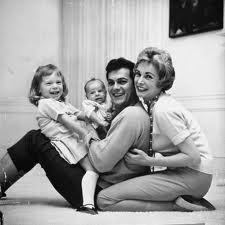 they developed disdain for that dependence and raised Kelly and me to need nothing and no one; in turn, they never wanted to be a burden to us. Neediness was an ugly word. In our profession, my mother and I prided ourselves on being not just low-maintenance but no-maintenance, while surrounded by divas who grabbed the focus with their demands. I understand so well what the pull of dependence does in families—but being dependent is an inherent part of being a child and, as our generation is now learning, an elder. It’s part of being human; we all need assists at different points in our lives. I know I developed a false pride in my self-sufficiency, and for a long time it kept me from intimacy with people I love. The same I sadly came to understand was true about my mother.

She took good care of me—my needs were always met and she showed up to everything—but there was no real intimacy. I think it was a generational issue as much as one of her own making, for many people my age have expressed a lack of connection with their parents. In response, my generation has turned parenting into an obsession, and that’s also not so good. I followed my mother’s custodial, caretaking path with my children at first. Luckily my daughter at age eight loudly demanded a different kind of relationship, real intimacy, and I heard her and changed, or at least tried to. I’m still trying to. I also got sober; that helped.

Janet was a public personality who always tried to make her fans happy, and this too was difficult for my sister and me. She belonged to the people when really she should have just been ours. I think it was exhausting for her, but because she came from such a meager background and rose to such heights, she felt she had to be approachable 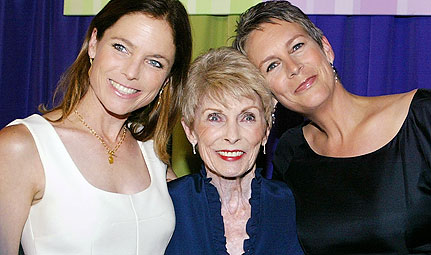 and relatable to all who met her. She talked to anyone, even when it interrupted time with her kids, husband or friends. I confess I now do the same thing; my family will look at me and say “Please don’t” when I am about to engage with some stranger, or, as Kelly calls it, Making Friends. I do want to credit Janet and Bob for their great ability to deal with people: Having learned from them, I can walk into any room anywhere, put out my hand and say, “Hi, I’m Jamie. What is your name?”

I vowed to not be like my mother and yet found myself so very much the same. That is the biggest contradiction of every generation, and certainly of ours; we all have become our mothers. I literally copied mine by following in her exact footsteps, from being a young actress (we were both 19 when we started)—she the Scream Queen and me, her lady-in-waiting. We both also worked in comedies, musicals and adventure stories and became authors later in our lives (my mother’s autobiography is entitled There Really Was a Holly­wood). We each had a famous body, stable marriage to an outdoor-loving guy, two beautiful children, a house in the canyon surrounded by eucalyptus trees, big dogs, a second home in Sun Valley; I am even playing tennis in a weekly group as she did. Most important, we shared a powerful drive for immaculate order and control. I am still following her down that narrow (but very tidy) pathway… 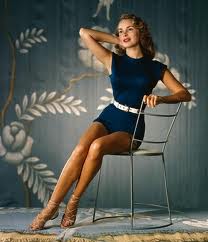 k the most complicated relationship my mother (pictured left) had, both loving and often cruel, was with her own body. Her face was undeniably beautiful, like a shot of something strong, and her body—that body was the chaser. She was intoxicating. Like anyone who becomes famous for what they look like, when that commodity starts to change, the relationship with it deteriorates. Her friends noted her slimness by calling her Bird Legs, and my mother was incredibly proud that she returned to her 20-inch waist mere weeks after pregnancies; she judged other actresses whose bodies grew and softened. I think she was afraid that it would happen to her too.

It feels like that fear is now global. Our dissatisfaction with what we look like has reached epidemic proportions. Just look around you: People don’t look right. Lips, eyes, hair weaves, implants. It is a freak show being fed by the business it generates, a modern-day Surgical Industrial Complex. I’m sure my appearing without the usual styling and makeup tricks in this magazine, in the 2002 article I titled “True Thighs,” was my unconscious way of saving myself from the same fate. By acknowledging my own changing body, I rebelled against my mother’s fear of it. I know the article and the attention it got were difficult for her.

What has occurred now, five years after her passing, is that my admiration for her has swelled as my disappointments have lessened…