Here is the very latest on Demi and her daughters:
Read Demi vs. Daughters:  Are the Girls Getting a Restraining Order? (see previous article below)
We felt this is worth including on Motherrr.com because part of the difficulty in their relationship stems from the fact that Demi has tried to be more of a “pal” to her daughters rather than a mother figure and they are now being put into a difficult situation.

Is Demi Moore Getting the Cold Shoulder From Daughters?
MSN Entertainment

Many people come to Motherrr.com looking to find out more about Demi Moore and her own mother since they had such a difficult relationship.  And now there’s been news about a recent rift between Demi and her own daughters.  We weighed whether to put this new information on the website, because it seemed a bit “gossipy.” But, at the same time, it prompted an interesting conversation here at Motherrr.com about a mother’s role in 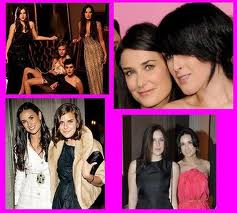 relation to her daughters so we have decided to include a link to it.  We found it significant when we read the quote from a source saying that, while “the girls were there for [Demi] through it all – the split [from Ashton] and the rehab – now they just feel like they need a little distance.”  Moore, said the source, “is just being very needy right now and the girls are tired of it…they want a mother, not another little sister.”

Initially, in reading the headline and the beginning of the article, it sounded like her daughters were being a little spoiled, but once we read on, and especially the quote above, we saw her daughters in a different light.  It certainly is reasonable that they would want Demi to be the mother in their relationship and not vice versa. Demi seems to have become so focused on her own needs that she has forgotten her daughters.  This is a good example of how mothers can sometimes cross the emotional boundaries with their daughters and end up hurting the relationship.  Mothers don’t always realize how painful it is for their “child” to see them fall apart and emotionally distressing for them to be the one the mother ends up leaning on.

Demi Moore and Her Mother – A Difficult Relationship at Best

Moore’s relationship with her mother, Virginia King Guynes, was rocky at the best of times, stemming from an unhappy and difficult childhood. Mother and daughter both became alcoholics.

Guynes would later talk of times when the pair started sharing a Hollywood flat together in 1980, where Rob Lowe, Sean Penn and Charlie Sheen would regularly come round for drinks. That era ended with Moore and Guynes ch

ecking into a drug-and-alcohol-recovery program, from which Moore emerged clean. Guynes failed her recovery and at Moore’s 1987 marriage to Bruce Willis fell off the wagon with a champagne and vodka binge. The next day she was picked up for drunk driving and Willis and Moore refused to bail her out.

In 1989 Guynes OD’ed on pills and was again arrested for drunk-driving. In 1990 Demi foot the bill for Guyne’s eight month stay in rehab, but cut her off when Guynes sold the story of her recovery and tumultuous relationship with her daughter. Guynes embarrassed her daughter twice with pictorials in adult magazines, including her 1993 12-page spread in porn magazine High Society (after being turned down by Playboy). She posed in front of a potter’s wheel, parodying Moore’s sex scene with Patrick Swayze in Ghost, her translucent white panties glistening with wet clay. As well as the shoot, Guynes also alleged that her daughter’s marriage to Willis was ‘in trouble’ and that Moore called the shots. ‘The more famous she becomes’, said Guynes, ‘the more bossy she becomes’. She also posed in photos spoofing Moore’s controversial Vanity Fairpregnancy and bodypaint covers and said ‘I dont want to hurt her. This is my story, my life.’

In 1993 at the premiere of Dragon: The Bruce Lee Story Moore introduced her companion, Pattsy Rugg as her mother. Rugg was actually the star’s Alcoholics Anonymous sponsor, but Moore seemingly preferred her to play the maternal role than her mother. ‘Its just so stupid that Demi would say anything like that’, Guynes later said, but added, ‘Demi’s a pretty strange child. She’s angry with me. This is what she does when she gets angry. What she will do is find the single most hurtful thing and do it.’

In 1994 Guynes pleaded no contest to a charge of setting fire to the home of a bartender who caught her swiping drinks. She was fined and ordered to go to rehab. Guynes it seemed was dying to be a star. Some even went as far as to say that she was trying to get back at her daughter for leaving her behind. In November 1995 a tabloid tracked her down at her then-home, a rat-infested shack in Las Vegas with a beaten-up ’88 Honda Prelude (a one-time brand-new birthday present from Moore and Willis) parked out front. She was surviving on $250 a month social security and $85 a month in food-stamps. In 1996 she was located in New Mexico where she died two years later in 1998 at the age of fifty-four from a brain tumor. 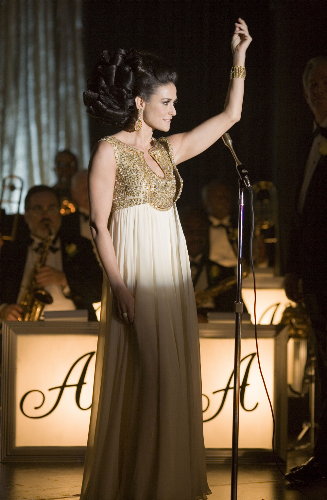 Moore later spoke of how her character in the Emilio Estevez drama, Bobby, made her draw on her own perception of Guynes. Her character called Virginia, like her mother, was an alcoholic.

‘The fact that she was called Virginia grounded the part in something that was familiar,’ explained Moore. ‘And, although there were aspects of it that were painful, it was actually very liberating for me. Emilio knew my mother and she was a pained soul. But it was a great gift being able to go to the depths of the soul that lives underneath the pain of this character.’ Also saying that ‘I had an unusual childhood.’

‘I had a very young mother,’ Moore says. ‘But I know she tried to do the best she could and that in the mix of it all – and she was nutty, trust me – she really loved me. It wasn’t always the kind of love I wanted but that doesn’t necessarily mean it wasn’t what I needed.’ 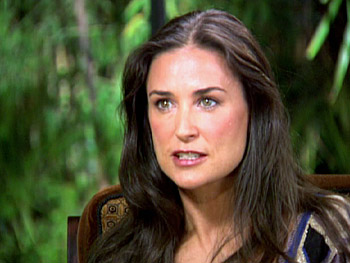 For someone so committed to doing the best for her own children, Demi says her relationship with her mother, Virginia, was sometimes challenging. Demi says her mother had her when she was just 18. By the time Demi was 5, she started calling her mom Ginny. “My experience is that I was very much the mother to my mother.”

Demi says her mother had undiagnosed bipolar disorder and struggled with addiction, and Demi left home at 16.

As Demi became famous, their relationship became more difficult and Demi eventually chose to completely cut off contact with her mother. “She made some choices that were, what I felt, potentially threatening to my children and the family that I had created,” she says. “In the moment I felt as if it was the best thing that I could do, because it was setting myself up to have something unpredictable. Whether it was selling stories to the tabloids or things that I just felt I couldn’t trust.”

Read rest of article and how they reconciled (page 2)